Migrants queue up for the only meal of the day in Calais, France.

This is where I have spent the last 4 months…Calais is  a town on the English Channel (in France) 10 minutes from my little house by the sea. Migrants, mostly run away from war-torn and violent dictatures  from East Africa and the Middle East, arrive in Calais after very dangerous journeys because they want to to go to England and start a new life there.  I completely immersed myself  in their plight, from feeding 800 people every day, trying to find blankets and tents for more than 1000 people, (including about 150 women and children), protesting the government’s violations of Human Rights toward them and taking journalists around.

It’s been a very busy summer, both despairing and incredibly interesting, because these migrants  are a representation and a consequence of all the world’s problems in one little town. Africa is arriving at my doorstep in dire need of  help.

Everyone in this world wants a normal life, a safe place to live, a decent job and a family.

Everyone, regardless of color, race or religion deserves this. 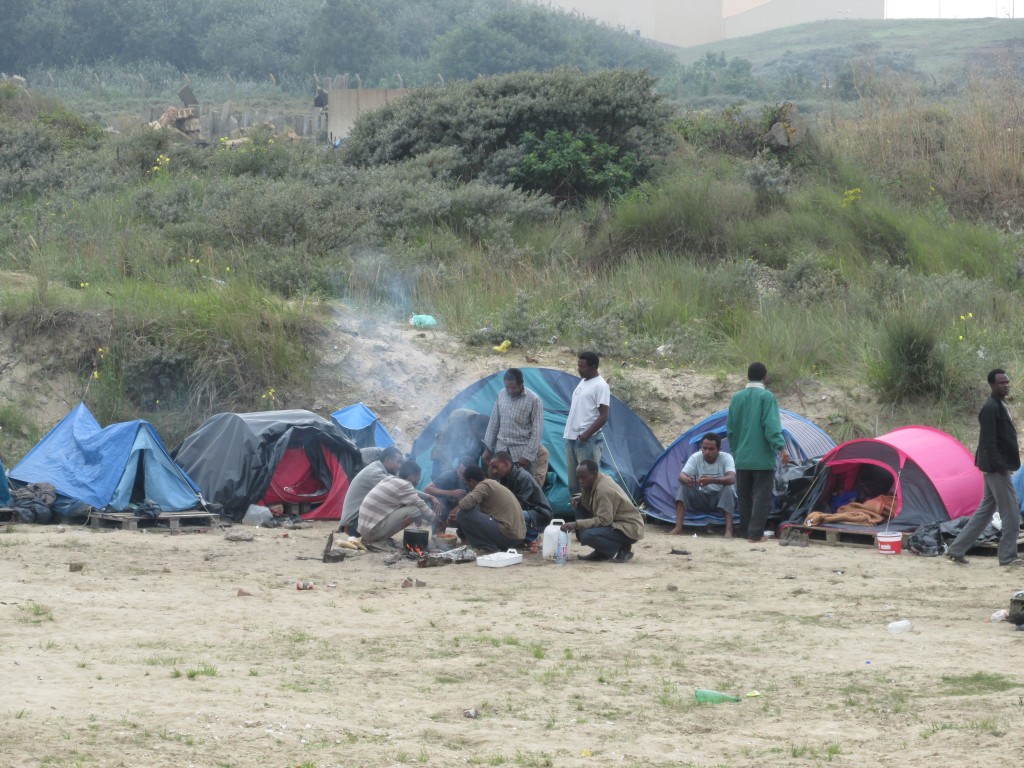 In the country of Human Rights, 1000 migrants have no choice but to live on squatted land with no water and no toilets on site. There are only 7 showers for them , 3 miles away.

3 years later, things are even worse! For 18 months, from April 2015 to the fall of 2016, a huge shanty-town became home to up to 10 000 refugees in it. Both refugees and volunteers built this place together. It became known all over the world as  the shame of Europe, the biggest slum in the continent, and it was. But it was also a place where volunteers and refugees created humanity together… Not a single person who has spent a day in that place has not been changed by what he/she experienced there, both in horrific and beautiful ways. I actually lived in the jungle during Jan et Februray 2016, an unforgettable experience. 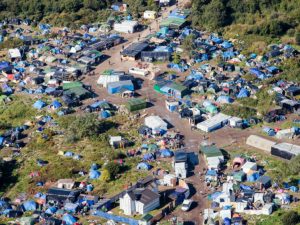 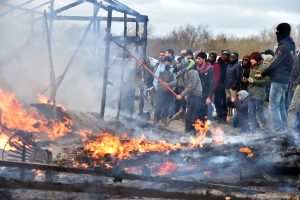 Migrants try to extinguish a fire during the dismantling of half of the “Jungle” migrant camp in the French northern port city of Calais, on February 29, 2016. Clashes broke out between French riot police and migrants on February 29 as bulldozers moved into the grim shantytown on the edge of Calais known as the “Jungle” to start destroying hundreds of makeshift shelters. AFP PHOTO / PHILIPPE HUGUEN / AFP / PHILIPPE HUGUEN

Today, there is no more jungle, no more camp, the government dismantled it.There are, however, still about 1000 refugees in Calais.  They sleep in the grass, under trees, as associations are not allowed to give them tents! They have no access to water, no toilets and many have not taken a shower in 2 months, the only ones they get are from French people who invite them in their home so they can have one. As the government intends of never being a camp there again, it tells the police to harass the refugees: they get chased every day out of their sleeping place, and routinely gassed with tear-gas. Their blankets and meager belongings are confiscated and thrown in dumps, forcing associations to continually find donations so these people survive.

Showers have been installed, but the police keeps confiscating sleeping bags and blankets at any time of the day or night, preventing refugees from staying warm and sleeping enough. They still routtinely gassed with tear-gas. Everything is done by the French governement to discourage them from staying in Calais, only 20 miles from their dream-goal…

Please note that I am relating the situation in Calais, where I am active. But the situation is the same in many parts of France, including the italian-french border, Paris etc…

President Macron came to Calais a few days to announce “new” agreements with the British government, but the only result was a sudden arrival of 200 minors in the city, hoping to be taken to the UK within a few days, which will not happen: those agreements have lacked clarity and dates, and led only to confusion among  refugees desperate to settle and live a normal life. 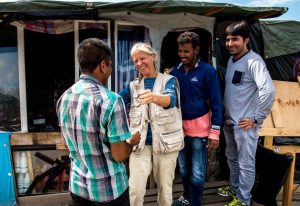 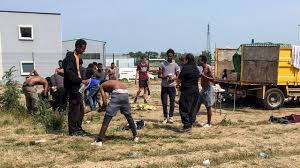 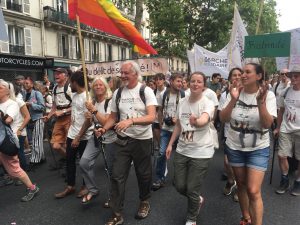 For 2 months and 10 days, a total of 3 000 people participated in a march for refugees, doing one leg or several or all the legs of the 850 mile journey. Every evening, we arrived in a different town, gave speeches, waves banners and chanted. Every morning, we started walking again… My partner (who had organised the march) and I walked the entire journey…

Marching is not changing  (yet!) the attitude of the French government, but it is connecting people of the same mind together, bringing us new ideas and the courage to keep fighting for them.

A second march was organised and finished, this one being a 24/7 relay from Italy to Northern France…. 850 miles again walked by people relaying each other day and night, together with a big and successful protest in Calais organised by the refugees themselves. 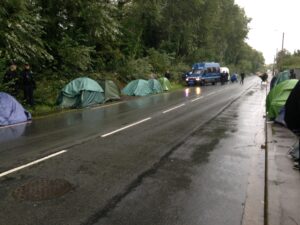 The last year has been an endless battle to try to insure that refugees on French soil are given the Human Rights which every citizen of the world should have. It’s a battle fraught with many defeats, and very few precious small wins.

But we keep on fighting: we cannot give up on such basic rights as the right to enough food, water and shelter for very human being on earth. Las, there is much work to do.

The coronavirus, even if it can infect rich or poor, shows the inequality exiting in the world: inequality in access to healthcare, in access to a home in which to stay confined, inequality in keeping a job in these trying times… all over the world, all human beings are affected by the same virus. But chances to stay healthy or to ride the looming economic crisis are definitely not equal for all.

In Northern France where I arrived in mid-march (the very day before the forced confinement!), and after a great spring season of shows, I am lucky to have a yard because I can get as much fresh air as I need it,  put my hands in the earth and plant a few seeds. I spend lots of time also in on-line meetings and visio-conferences to organise help for the refugees: They are confined in the streets, and still evacuated daily from their surviving places. The government has not yet managed to organise the indoor confinement they are legally required to put in place for them.

We are still fighting!

We are not giving up!